For Jack Carlton, Requiescat in Pace 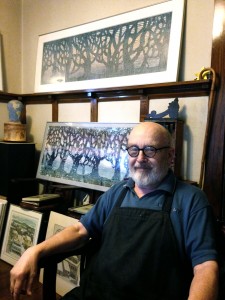 of all our tendentious moments
here on this long wave
we’ve been riding for half a century.

Jack, I see you now in old man’s
shoes, a linen suit, a straw boater
and a bright red jazz bow tie

streets, or the horses you trained
in Maine, or all the great friends
you made and loved in Kent

you back for being true to art
and true to humanity
and for giving much more than you took.

The Vindicator: Jack Carlton’s story unfolds like his art. Shaped and layered with rich and varied experiences that inform his work with images, languages, and methods that became entirely his own. He was a vagabond at heart. Traveling from one place, one medium, one idea to another throughout much of his illustrious career. He lived and worked in Morocco, parts of Maine, Ohio, and the city of Boston, with short stays in New York City, in between, while making, teaching, and selling art to move on to the next place he should be.  Carlton exhibited extensively throughout these regions and beyond, finding places for his work in public and private collections in the United States, Europe, and North Africa. He was commissioned by the Vietnamese architect to King Hussein II to portray the Mausoleum of the King’s father, taught Art and English overseas, and created outdoor exhibitions in galleries and neighborhoods across the world. He earned his sculpture and painting degrees from Kent State University and a MFA in printmaking from the School of the Boston Museum of Fine Arts and Tufts University.

Carlton described his work as a response to the changing world around him, a personal diary of what he was thinking about or what was happening in the world today, tomorrow and yesterday. “ I work out ideas in sculpture, painting, printmaking and artist books,” he said. Often produced in series, many of these works were premised by social issues, current events, and political activism, touching the artist in some way. While Carlton settled into older age in Girard, his approach to art-making still wandered like a young man pursuing a dream. There will be a celebration of Jack Carlton’s life held at Dorian Books in Youngstown on Sunday, Dec. 9, at 2 p.m.