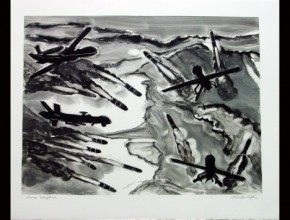 And when the thousand years are expired,
Satan shall be loosed out of his prison,
And shall go out and deceive the nations
Which are in the four quarters of the earth,
Gog and Magog, to gather them together to battle:
The number of whom is as the sand of the sea.
Revelations 20: 7-8

Living in the Land of Gog
we see but dimly
as through scrim of fog.

So much is hidden
from our privy
view, daily we are bidden

whose heads bob and prophesy
war, disaster, horror for
a future we must prepare for by

spies of our enemies, the dogs
who live in the Land of Magog
and worship the false god.

Living in the Land of Gog
we must bow to the One God
who knows and sees all: Aygog.

Aygog the All Mighty, who chose
to live among us as common sod
who nightly burned like us and daily froze

and bled Himself for us so that we
lowly might eat and drink of Him,
suffer with Him to make ourselves free

of all that is earthly, all unclean
unseemly habits, unprescribed behavior,
all action not writ down from His dream :

the Great Dream of Aygog that screams
out the aweful name of the Savior
while we are shaken awake, the teaming

and we all chant as one our prayer,
our plea for cleansing war and fire :
for the legions to sweep down where

the forces of Magog gather
and to drown them all in a sea of blood,
a burning sea from the mouth of our Father.

Living in the Land of Gog, we
are lucky to have thinking machines
that do our cleaning, our fighting,

sweep clear the battlefields of bomb
and enemy, sweep our homes clean
from dirt, dust, and sin that come

to run the machines that drop
death upon the heads of the dogs
of Devil-worshipping Magog,

pilotless drones whose eyes
are the fingertips of our offspring
flipping the switch, clicking the keys

that drive our robotic justice over
heathen terrain to do His will,
for we are Aygog’s servants forever

and forever will we bend the knee
in duty, in obeisance, vow to kill
all those who, in enmity, follow His enemy

and we greet each morning as the crow
caws gladly his orison shrill,
his prayer to Aygog cleansing his craw,

such quietus to morning’s gray chill
like a battlefield after the drones
and droids have left it clean and still.

There is a river that flows wide
and long through the Land of Gog,
a river of blood whose high tide

washes up the bodies of those few
who are unholy, unfaithful; traitors who
have not washed themselves in the true

life’s blood of He Who Bleeds For All
He Whose Blood is a River:
Aygog, the All-Knowing, vengeful

God of Gog who will destroy
the False God of Magog
like a child who steps on a toy.

the pall of the mortal curse
by baptism in eternal water.
We sit by these shores and rehearse

to raise us up after the final battle
when our killing machines give birth
to Death for our enemies, hot metal

and blind alley ways; apartment
hallways, office corridors beckon
them forth to the final judgment,

our reward to see as through scrim
or dark glass the visage grim
of eternity glimpsed through a curtain.

from   Eavesdropping in Plato’s Café

Featured Print:  Drone Warfare  by  Linda Lyke
Drone Series:  Drone Warfare is from a series of prints about the one of the world’s most controversial technologies: unmanned drones.