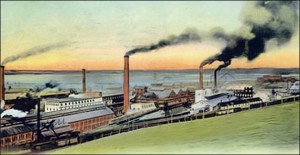 Keeper of the fire of the One United
Longhouse of the Haudenosaunee,
The people of the longhouse, who

Long ago and the weapons of war
Were cast into the abyss
To be washed away forever.

But forever is much too long a time,
And the weapons of war
Have changed. And the snakes have returned

In factories. War clubs and tomahawks
Replaced now by sodium chloride
And ash byproduct and god knows what

Other chemicals dumped
Into the holy lake by corporate enemies
Of the earth:

Raping our mother with
No regard for the future generations:
The unborn faces in the ground,

The ground now filled with filth.
The pure silver lake is now a cesspool
Of mercury and feces: one of the most polluted

Lakes in America, where effluent
From a waste plant flows unimpeded into it.
No swimming allowed. But poor blacks

And hungry immigrants still fish
Her fouled waters and sicken from the catch.
The place chosen for the continuity

Of rational existence, of how to be a true
Human being walking the ways of the Creator
In the days before colonial greed

Is now the most polluted place in Iroquoia,
Now called Syracuse New York
Where once crystal waters brimmed with fish,

Place for deer and beaver to drink,
Place for the people to drink, now unfit for creation
Making a mockery of the Great Mysterious’ plan.

When I was given a tour of the Great Law of Peace Center on Onondaga Lake by its director, Dr. Philip Arnold, and Sandy Bigtree, I was shocked to learn that the sacred Onondaga Lake, which is the setting for the beginning and ending of my historical novel Turtle Island: A Dream of Peace, is the most polluted lake in America.  Most every spiritual faith has its sacred sites and Onondaga Lake is one of the four sacred sites of the League of Six Nations, which is composed of the Onondaga, Mohawk, Seneca, Oneida, Cayuga, and Tuscarora Nations.

Centuries before the Europeans invaded Turtle Island, which is how indigenous people perceive the continent of North America, five nations were caught up in a cycle of bloody revenge wars until a holy man, the Great Peacemaker, showed them the path to peace. And they met on the banks of Onondaga Lake and agreed to bury their weapons, planted the Great Tree of Peace on the bank of Onondaga Lake, and formed the Haudenosaunee Confederacy, which was the first democracy on the American continent.

In colonial times, the French called them the Iroquois and the English called them the Six Nations.  The Haudenosaunee Constitution, which emerged from the historic gathering on Onondaga Lake, had a tremendous influence on the colonists, and some say that what made the colonists and our Founding Fathers pull away from their English roots and become Americans with their concept of liberty and justice for all were the principles used by the League of Six Nations formed at Onondaga Lake.

How did Onondaga Lake, which should be a sacred site to Americans as well as Native Americans, become so polluted?  It began in the 19th century when Ernest Solvay, a Belgian chemist, developed a chemical process to produce soda ash from brine.  He built his first factory to use his new method in 1863 in Belgium.  A clever industrialist, he expanded rapidly and opened new factories in Europe.  In 1881, Mr. Solvay incorporated the Solvay Process Company on the southern end of Onondaga Lake. They produced around 20 tons of soda ash per day, and to maximize profits, they dumped most of its waste material directly into the sacred Onondaga Lake.

In 1920, they merged with four other chemical companies, forming Allied Chemical and Dye Corporation.  They dropped the Solvay name, probably because they had been threatened with lawsuits over their reckless pollution of Onondaga Lake by the New York State Attorney General. Under their new name, they began using mercury to produce chlorine.  They dumped around 25 pounds of mercury per day into Onondaga Lake until the fish became toxic and the government had to ban all fishing and swimming in 1970.

In 1985, they morphed their name again to AlliedSignal.  Their current name, Honeywell International Inc, is the product of a merger in which AlliedSignal acquired the much smaller Honeywell Inc.  Even though it was smaller, they claim they chose the Honeywell name because of its superior brand recognition.  However, the real reason may have been to cover up their destruction of the sacred Onondaga Lake.

This year Honeywell was ranked 75th in the Fortune 500, yet they still refuse to clean up all the mercury they dumped into Onondaga Lake, insisting that it is safe to leave a significant amount on the bottom.  You may want to boycott all Honeywell products until they assume their responsibility as an ethical company and clean up the toxic waste they left behind.  The health of our environment, our spiritual landscape, our historical heritage, our people, and future generations is far more important than the Honeywell profits for the rich.