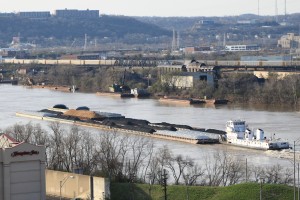 Something white floats on the water
Close to the opposite shore:
White like floating paint or a ghost
Made flesh, hanging there,
unmoved by the current.
A white plastic bag hangs high in a tree,
A vacant soul blown by a swirling wind:
Breathing in and breathing out
Like a broken balloon on a naked limb.

Whose life is this, anyway?
The loudest towboat on the Ohio
Owned by American Electric Power —
(AEP) emblazoned on the oval smoke stack
Now the fourth largest barge operator
With 1,800 barges and 45 tow boats
(Are they all as loud as this one?)
Pushes a load of rip-rap rock and gravel
Sending a loud steady groan
That echoes through the town
And up and down the long-hilled valley.

Hart would not disclose revenue or earnings,
But AEP’s recent acquisitions have been
Profitable, he said: “Wholesale investments
Including the Houston Pipe Line, the MEMCO
Barge line, the AEP coal mines, push us
“Goll-durned through the roof,” he said.

Five fires burning on the opposite shore.
Whose life is this anyway?
Down in eastern Kentucky
And western West Virginia
Descendants of the Hatfields and McCoys
Try to keep their heads above
The arsenic and mercury flood
Of thousands of acres of coal sludge:

Non-biodegradable mining byproducts
Held in ponds that periodically break loose
And come cascading down
In rivers of thick gray slurry
Creeping and burbling up
To windows and back doors
Taking over the rusty sliding boards
And bar-b-ques, the jungle gyms
Covered with slick poison slime:

“Thank God the economy is back in swing
And we’re ripping out enough coal
To make some sludge,”
Said the head of the local Environmental
Protection Agency (EPA), himself
A former mine owner.

Whose life is this anyway?
Not those folks whose houses back up to
A river of coal slurry
Whose kids are afraid to go to sleep at night
Whose property is worth zero:
Forget that catfish pole,
Young man, break it over your knee,
And the swimming hole of your youth,
Old boy: all that 1900 crap is history;

Get with the scheduled program,
Tune in to the new millennium:
You gots to live in virtual reality now
Cause real reality ain’t fit to live in —
Crawl inside your computers
All ye who can afford them
All ye who are brave enough
To march forward like soldiers
Into our brave new cybernetic world order
And lock your doors
Against the coming storm.

Featured Photograph: Barge pushing coal on the Ohio River
…..By Dwight Burdette (Own work) via Wikimedia Commons
…..[CC BY 3.0 (http://creativecommons.org/licenses/by/3.0)]


＜ Renaming the Species
＞ Whose life is this an...