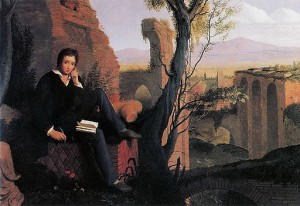 I met a traveller from an antique land
Who said: “Two vast and trunkless legs of stone
Stand in the desert . . . Near them, on the sand,
Half sunk, a shattered visage lies, whose frown,
And wrinkled lip, and sneer of cold command,
Tell that its sculptor well those passions read
Which yet survive, stamped on these lifeless things,
The hand that mocked them, and the heart that fed:
And on the pedestal these words appear:
‘My name is Ozymandias, king of kings:
Look on my works, ye Mighty, and despair!’
Nothing beside remains. Round the decay
Of that colossal wreck, boundless and bare
The lone and level sands stretch far away.”

Shelley was a radical. He hated tyranny and loved freedom and liberty and the rights of the common man. The Mask of Anarchy, Prometheus Unbound, and The Triumph of Life are all great long poems that celebrate the triumph of libertarian values over tyranny. Shelley’s sonnet, Ozymandias, is one of his most famous poems. 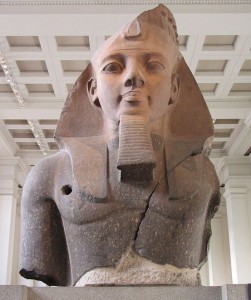 It began as a friendly competition between Shelley and his friend Horace Smith, based on a recent announcement of the British Museum‘s acquisition of the adjacent statue.  They chose a passage from the Greek Historian Diodorus, which described a massive Egyptian statue and quoted its inscription: “King of Kings Ozymandias am I.” This fine poem reflects Shelley’s view that tyranny cannot last and that tyrants will always vanish in the end and return to the dust that they came from, as all things do.

If you like our video, please share it so we can help build a broader appreciation among the younger generation of the immortal poetry written by Shelley.

＜ Ode to the West Wind
＞ Fragments from the Go...