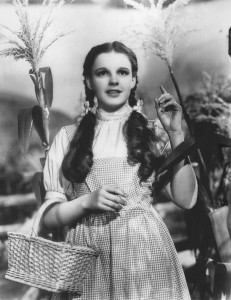 until the Wizard showed his sideshow hand
and you touched it Dorothy
—————————all polka-dot and hunger
you rode his cure-all car
—————————thru cheering munchkins
cheering long live Dorothy and
long live our john wayne sham & hambone
saviour our dodge city gambler and now
I am scared out of my baby fat
at this point at this scene
my altar bells ring
————————my ghost mask falls
my shopping bag full I cry
as I cry each year at this time:
—————————–Dorothy be careful
—————————–look out
his fingers are needles are lightning
his floodlights are thrilling
but he’s Halloween’s bad candy man
————————dealing the cards like
Tombstone Tarot like Lash Larue
who holds no bluff for tincan hearts
who beats out your song
————————on his Halloween porch
a Broadway magus with musical bones
——————————– (Oh Dorothy)
your straw wanted real ones
made in Oz yes but
not by this wizard of nightclub bubbles
this junkman wizard of trick or treat
——————————-who stole the heels
from your red red slippers
each year of my movie
————————each day of your story
in Emerald City
——————– in Oz
on the tail end of America’s fairy tale.

On June 22, 1969, I was listening to the radio in my room across from the campus of Kent State University, when Judy’s voice came on singing Somewhere over the Rainbow, and then an announcer interrupted and said: “Today that voice was stilled. Judy Garland is dead.”  Judy Garland had died of an overdose of drugs and alcohol.  Like most everyone across the country, I was stunned. We had grown up watching the Wizard of Oz every Halloween on television, and Dorothy’s story was not supposed to end that way.  Perhaps it was not all her fault. When she was making the Wizard of Oz and other movies, the studio fed her amphetamines to get her through the day’s rigorous shooting schedule and then downers to get her to sleep at night, which resulted in a lifelong dependency on drugs.   My heart was full of sorrow as I sat down at my typewriter during a fierce lightning and thunder storm and this poem poured out of me.