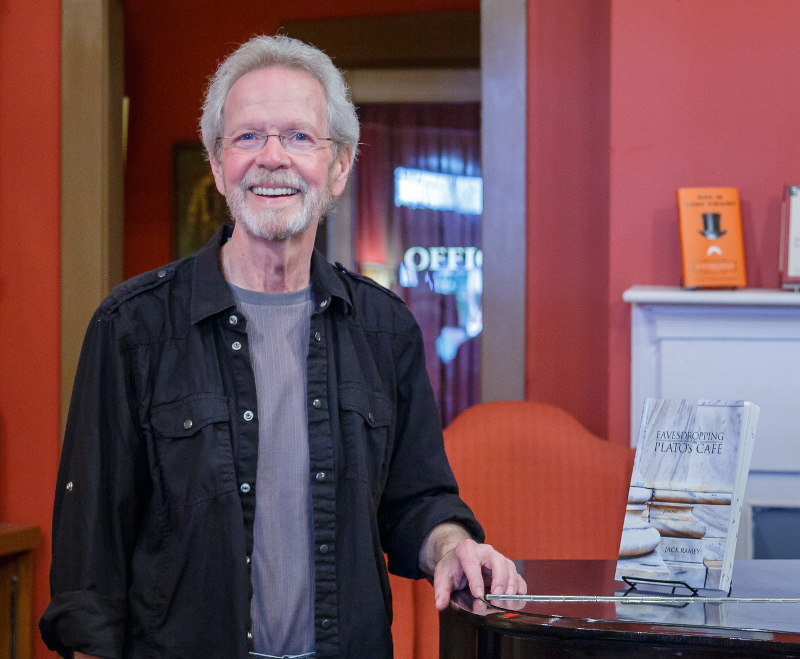 Jack Ramey, the author of Eavesdropping in Plato’s Café,
at Village Lights Bookstore, Madison IN

In real and imagined terrains, where the past often mingles with the future, and is always alive in the present, the poems in Jack Ramey’s provocative new collection, Eavesdropping in Plato’s Café, are lyrical celebrations of the mysteries of life, death, and eternity. In these compelling evocations of the natural and supernatural world, he embraces the fragility of existence. The three sections of the book, End-Games, World-Soul, and Ghost-Dance, take the reader on a journey through time and space that is as real as the 21st century ground beneath our feet and as magical as the ancient promise of an afterlife “where all forgotten dreams are remembered.”

The title poem and others in the collection touch on the intellectual and aesthetic history of the West, while others trace a highly personal spiritual evolution incorporating both eastern and western spiritual thought. The poems, both the long ones and the shorter lyrics, are filtered through an understanding that we as human beings are all temporal creatures striving toward some understanding of why we are here and where we are going. They speak through a highly charged musical idiom that touches the intellect as well as the heart.