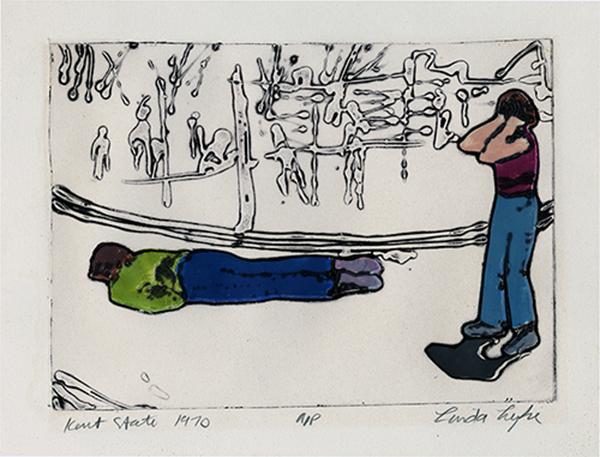 Pagans, Christians, Muslims, Jews:
You are all the sons of blood.

Worshippers of Mithras
Of Horus, of Isis, or Mars:

You are all covered in blood:
The blood of sacrificial bulls

And lambs and doves,
Crucified messiahs and saints

Soldier coming from solidus,
Those who are paid in coin

Of bleeding prime rib ripening
In the Trojan sun. Or Lt. Calley

In the hamlet of My Lai
In Son My village, So’n Tihn District

Beside some burning banyan trees
Napalm clinging to their limbs

While their few remaining loved ones
Weep and scream and keen

And pray to their ancestors
For some rational answer

To the specter of death and horror
That has curtained their lives.

Or protestors of that very same war,
Students at a Midwestern college campus

In Kent Ohio on a bright spring day
In May 1970, shot down in cold blood

And a Chief Executive so paranoid and afraid
Of dissent that he decided to wipe it off the map.

Or jihadists beheading Christian
Spies on the drone-blasted sands of Syria,

An ancient land drowned in centuries
Of blood since Alexander and Augustus,

Or Templars burning Muslim Saracens
At the siege of Acre, red crosses on their chests

Or Buddhist monks lighting
Themselves up with gasoline

Still photos from 1963 or John F.
Kennedy getting his head blown off

Normans and Saxons,
And Vikings and Danes,

Or elephants rotting on the plains
Outside of Carthage or in the Cisalpine Alps.

My God, does this never stop?
I could go on like this until the day

I die, until the day my own blood
Stops coursing through my veins

Through my heart up to my brain
And never run out of historio-graphic examples.

Our species needs a new name.
Homo is no longer, nor has never

Been sapiens. Whose vainglorious idea
Was this to begin with? Carolus Linnaeus

That obsessive Swede. The second Adam. Did he
Really think that mankind was wise? Did he

Never lift up his eye from a microscope lens
In Uppsala and look around him, or investigate

The bloody farce of history?
We are not wise. We are violent.

As if it were a penny arcade shooting
Range or a new single-shooter video game.

Homo violencia is the name I now
Propose to describe this walking,

Inventing, grasping, killing machine that now
“Peoples” the planet with greed and lust

Like a pride of lions eating a living gazelle
Genitals first, up through the guts to the brain

Leaving the rest for a pack of hyenas
Or a flock of red-necked vultures to feast on.

We kill all we touch, including ourselves,
Including the earth that we live on and kill on:

Featured Print:  Kent State 1970  by  Linda Lyke
Linda Lyke, a faculty member in the School of Art at Kent State in 1970, created the above print in response to the horror of the Kent State shootings.