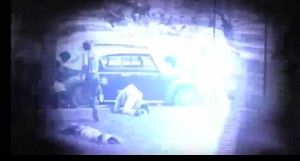 Screened at the KIVA, Kent State University, Sunday, May 3, 2015

This documentary features an interview with Nancy Rodgers about her experiences at Kent State where she was a math professor from 1968-78.  Rodgers had attended many of the protest rallies which were held outside her office and was at the burning of the ROTC building. The next Monday, she was a faculty observer at the Kent State shootings, which dramatically changed her life. After the shootings, she was one of four founders of the Kent Legal Defense Fund which raised money for the defense of the Kent 25. Because of her work with the Kent Legal Defense Fund, she because a target for the FBI, who wanted to discredit her because she was a professor trying to help the protestors. The FBI questioned people who knew her in her hometown and made her mother and others think she was a criminal. They told her sister to warn her that she was in danger if she didn’t stop what she was doing. They even threatened to kill her and dump her body in the river.

The documentary was produced by Elizabeth Winters’ Media Writing class at Hanover College. Their goal was to shed light on government actions at Kent State as a lesson to young people today that they always have to be on their guard to protect our democracy from officials who would stifle public protest and overstep their authority in the name of public security.

Before the screening at Kent State, Elizabeth Winters and Nancy Rodgers made the following introductory remarks:
Elizabeth:   We’d like to tell you how we got involved in this documentary, which was produced by my Writing for the Electronic Media class last winter at Hanover College.

Nancy:  I taught at Kent State from 68-78 and was a faculty observer at the shootings, which like everyone else who was there that day, changed my life forever and how I view the world.  I hope that someday in the near future, historians will be able to reveal the historical facts about the federal government’s involvement at Kent State, like Seth Rosenfeld did in his marvelous book The FBI’s War on Radicals.  After 4 lawsuits and 30 years of research, Seth accumulated tens of thousands of pages of previously unreleased FBI documents in which he exposed numerous illegal and criminal acts the FBI was doing in Berkeley. And I’m sure J Edgar was doing the same thing here at Kent.

I wanted to do a documentary with John Dean because I thought he was one of the few remaining people who might be able to shed some light on the federal government’s involvement in the events at Kent State.  I had collaborated with Elizabeth on another educational video about Isaac Newton,  which was broadcast by PBS in Indiana.  Elizabeth is very talented.  She worked for eight years as a documentary producer for Florida Public Television, and when I met her at Hanover College, where she’s now chair of the Communications Department, I was surprised to find out that she also has Kent connections.  Back in 1970, her father, John Allensworth, was teaching at Kent in the Geography Department –

Elizabeth:  – and my mother was an operating room nurse at Robinson Memorial Hospital where the students were brought, and she later went on to receive her PhD from Kent and taught in the KSU Dept. of Education.  ​ In addition to growing up in Kent with both of my parents teaching at Kent State, I got my B.A. and M.A. in Journalism here.

Nancy:  Because of the Kent connection, I asked Elizabeth if she would work with me in trying to do a documentary with John Dean.  I pitched her by telling her various conspiracy theories about John Dean and Kent State.  For example, he was with J Edgar Hoover that weekend in Yale, and some people say that he flew to Cleveland on Sunday. I pointed out articles on Dean’s Watergate-Ethics course, which indicated that he might be willing to talk, and Dean’s article in support of Occupy Wall Street where he describes his role during the Vietnam War protests as being “as close to the situation as one can get, where he could see both what was occurring on the streets, and what was occurring behind closed doors in the government.”   I then told Elizabeth my personal story about what I had been through at Kent to try to convince her that federal agencies were heavily involved at Kent State.  At the end of my pitch, she told me that she thought my story was more interesting.

Elizabeth: While Nancy was giving her pitch… I was fascinated not so much by John Dean, although that was interesting… but by everything she’d gone through.  I thought… this is incredible.   Is there evidence?   I wanted to know more.   I wanted the story recorded.  And I didn’t want to wait.  I had a Media Writing class that had just finished a more traditional documentary project… with narration and interviews edited together.   I was already planning on assigning them to script a studio-based program, so I decided this would be a great learning experience.

Of course, they had to do a tremendous amount of research in order to be able to tell the story and to ask the right questions because we were recording it as a live broadcast with no edits afterwards.  When the students started researching… some of them became mesmerized by the story.  Especially Zach Ashton… the student you’ll see hosting the program.  It was the first time he had ever done anything on camera.  He was so into the research and so wanted to do it… and that’s part of the charm.   This it isn’t a polished piece. … it’s student work.  BUT… there is such an interesting story at the heart of it.  My staff members who were helping out that day were just floored.  They’d never heard the Kent State story told this way, and we knew our cable channel audience would be interested… as I hope you are today.

Nancy:  After the screening, Elizabeth will talk about the project as an example of how the Kent State shootings can be used in classes as a teaching tool and its relevance for students today.