The ancient Forum Romanum: a miracle of marble!
Columns Ionian and Corinthian and statues of gods
And consuls, temples lined inside and out with marble
And mosaic and tiles. Now ruins. Used for centuries
As a quarry to be mined by Bishops and Popes
To beautify their Christian temples that sit on the ground
Of once proud basilicas and temples dedicated to
The many, not the one deity. The Pantheon a temple to
All the gods and goddesses. Now one of the many churches
Named for Mary and the statues of deities replaced
By saints. Peter for Pan. Dominic for Apollo, and Maria
Grazie Plena for Roma or every goddess ever prayed to
In the vast empire of once accepted worship: Isis, Inanna,
Hathor. The outside once was covered with marble. Two or
Three pieces still exist. Holes like those on the Coliseum
Walls show where the marble was affixed, then ripped off.
Who then is left to make just reparation to the ancient gods? 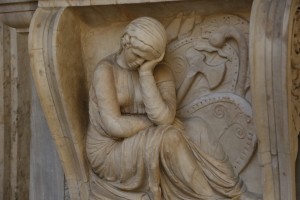