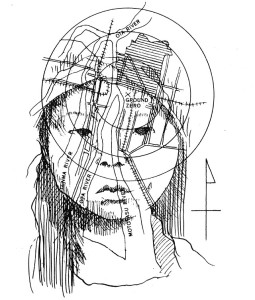 They knew what they had to do
and they did it
all for the red, white, and blue
and the 1945 Chinese Girls Drill Team.

The Enola Gay was waiting
props up and belly heavy with death
on an airstrip not far away.
The upper right side of her fuselage
bore a new inscription:
BURNT ALMONDS it said.
David Ghost, Astronaut,
had painted it in large red letters.

and Zackadu Monguenski was jerking off
in the men’s room of Peter Wong’s Cafe G.I.
to a picture of June Lockhart
getting her family lost in space;
a photo which David Ghost, Astronaut,
had given him
in a moment of
sincere hostility.

“Hurry up boys
it’s time.”
The Enola Gay is going into labor
wants to take an atomic shit
on the world
or at least Hiroshima.

“Peace cannot exist without War
Neither can tranquility without disturbance
Order without Chaos
and so it is with
humble heart
in this spirit
that I accept this
etcetera, etcetera, etcetera…”

Nathan Faltoon
stepped outside of the officer’s club
looking smart in the sunshine
which hurt his perfect ice-blue eyes
and made them squint.

He lit a Lucky Strike
took a deep drag, coughed twice
and walked across the street to
Peter Wong’s Cafe G.I.
to tear Monguenski away.

“…the only girl I ever loved…”
he was saying aloud
blubbering over the photo
in a booth by himself.

Faltoon striding over
grabs the snapshot
and rips June Lockhart to shreds.

“Get on yer feet Zack. Listen up
and listen up good.
So you loved her.
So she drove her Chevy Nova
thru a black hole.
She’s not the only bimbo lost in space
She’s not the only fish in the sea, boy,
but you’re Zack, remember?
Zackadu Monguenski, bombardier
extraordinaire
soldier of fortune
a million and one black holes
and deaths undreamed of
wait beneath your fingertips.

Monguenski rising, moved to tears,
stunned to duty,
floating to the door in aura of ether;
he knew what he had to do.

David Ghost
already in his Astronaut gear
was waiting impatiently
hopping around
on one leg
by the wing of the Enola Gay.

The great steel bird of prey
nosed open down the runway:
doom’s baby in megaton
rolling sleeplessly within her bombay womb
gathers speed,
and lifts off and up
with the ease and grace of a swan.

“Who’s the guy in the spaceman suit?”
“Oh, that’s David Ghost, Astronaut,
he’s coming along for the ride:
came into my life one night
with pictures of June Lockhart and
mumbling something about a fire
in his space ship.”

Meanwhile
a few miles below
a bunch of people
with eyes
shaped like almonds
are eating herring roe
with sticks,
drinking weak tea,
playing with their swords,
screwing on the floor
between rice-paper walls
committing Hari-Kari
and in general
thinking that life
is just dandy in Japan
for the moment.

I hear there is a big Toyota plant
in Hiroshima now
where miniature cars are picked
and sold by the thousands to weight-conscious
American shoppers.

It all makes sense
in a black and white world
when the instant of panic-zero hits
just before everything splits apart
completely:

All poems are products of their own particular time. My poem, “Burnt Almonds,” is a case in point. It is a parodic, satiric, and entirely science-fictional retelling of the flight of the Enola Gay and the bombing of Hiroshima on August 6, 1945. In my mind, this act was criminal and remains one of the most horrendous examples of mass murder ever inflicted on a civilian population during a time of war. It trumps the atrocities of Genghis Khan, Tamerlane, and Adolf Hitler. Apologists for military might and right-wing war hawks inevitably maintain that American lives were saved by this act of mass murder. But the fire-bombing of Tokyo and other cities by Curtis “Bombs Away” LeMay and his henchman Robert McNamara, from their base on the former Japanese island of Guam, had already brought the empire of Japan to its knees. They no doubt would have surrendered soon without the egregious destruction of two cities and their inhabitants.

“Burnt Almonds” is as much a reaction to the Vietnam War and the rise of nuclear technology and scientism in the United States during the decade of the 1970s when I was an anti-war exile living on the island of Vancouver in British Columbia. I worked in a Japanese herring roe packing plant with my friend Jim Ryan, who gave me a cigarette case/lighter from the last “Great War,” a sort that can sometimes be seen in 1940s film noir. It belonged to someone with the initials N.F. and bore the odd inscription: With affection and gratitude from the Chinese Public School Girls Drill Team.

My associative mind was off and running, imagining a character named Nathan Faltoon who was a pilot stationed in China in the ‘40s, and then flew the Enola Gay in an alternative-history rendering of the bombing of Hiroshima. The future comes back to the past in the form of David Ghost, a merging of the souls of three astronauts who perished in a fire in their space capsule in 1967. The satirical passage towards the end depicting activities of Japanese citizens just before implosion is based on the propagandistic and stereotypical picture that many Americans had of the Japanese during the war.

“Burnt Almonds” was published as a chapbook by Shelly’s Press (Kent, Ohio) in 1978. It was the second in a series of chapbooks that have become collector’s items. The original contains marvelous illustrations by Ken Muenzenmayer and Rhonda Mitchell. It is, of course, long out of print. Ken Muenzenmayer, a fine artist, continues to paint and teach in the state of Texas.

＜ The Spiral Destiny
＞ A Tribute to Native A...