A Tribute to Native American Heritage 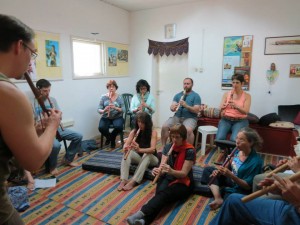 Richard Riviere at a workshop in Israel.

This month is Native American Heritage Month, but unfortunately, the study of Native American history is neglected in most schools. Our students are given a day off to celebrate Columbus, who never stepped foot in North America and, according to a Washington Post article, he “committed atrocities against native peoples on the islands and decimated their populations.”

To help supplement this educational gap and to help counter the white nationalist backlash from the election, Springwood Press and the West Street Art Center is sponsoring A Tribute to Native American Heritage this Saturday, November 19.

4 pm   Founding of the Iroquois League by Jack Ramey

Jack Ramey, will talk about the first democracy on the American continent – the Iroquois League – and their influence on the drafting of the American constitution. To give insight into their matriarchal society and spiritual relation with nature, he will do a dramatic reading from his historical novel Turtle Island: A Dream of Peace.

In the Native American Flute Workshop, Adam Riviere will give an introduction to playing Native American style flutes, its history from various tribes in North America, how and why they used it, and how to use it to create your own story, tradition, and music. Adam has studied more than 30 world instruments and does school programs from preschool to college level on music from the Middle East, West and Northern Africa, Latin America, the Caribbean, Australia, and Native America.

＜ Eavesdropping in Plat...
＞ The Untold Story of t...