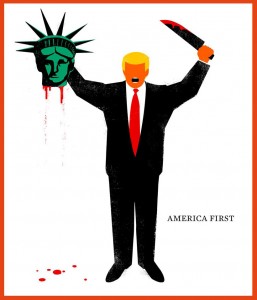 Because you are neither hot nor
cold, I shall spit you out of my mouth
said Jesus. But what would He make

of this new gang in the White House
who are hot and cold at the same time?
Hot to undue all progress and cold of

heart as the coldest stone frozen in ice.
Their tombstone minds keen to burn
the world in Dante’s lake of frozen flames.

by them and the ignorant half of this nation
who were fooled by a fool greater in cunning,
deceit, and stealth than they themselves.

Beware. The day of reckoning is coming
when the storm brewing in Washington
blows down your house of cards. The day

will come when you will regret what
you have done to yourselves, your children,
and the seven unborn generations yet to come.

Edel Rodriguez is a Cuban American artist who has exhibited internationally with shows in Los Angeles, Toronto, New York, Dallas, Philadelphia, and Spain. Inspired by personal history, religious rituals, politics, memory, and nostalgia, his bold, figurative works are an examination of identity, cultural displacement, and mortality.

Edel Rodriguez was born in Havana, Cuba in 1971.  In 1980 Rodriguez and his family boarded a boat and left for America during the Mariel boatlift.  In 1994, Rodriguez graduated with honors in painting from Pratt Institute in Brooklyn, NY. In 1998, he received a Master of Fine Arts degree in painting from Manhattan’s Hunter College graduate program.

Throughout his career, Rodriguez has received commissions to create artwork for numerous clients, including The New York Times, TIME Magazine, The New Yorker, and many other publications and book publishers. Rodriguez’s artwork is in the collections of a variety of institutions, including the Smithsonian Institute in Washington D.C., as well as in numerous private collections.

Related Articles:
Who Donald Trump Reminds Me Of
Priest Compares Trump to Herod
Martin Niemöller: “First they came for the Socialists…”
Famous poem by an anti-Nazi pastor, rewritten for Donald Trump’s America