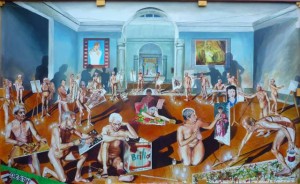 The School of Postmodernism

Donald J. Trump,
the country’s first postmodern president
has shown us that there is no Truth.

is a postmodern concept related to
what physicists call anti-matter.
Even his minions know that the meta-

of the meta-verse where Truth or Fiction
slip into and out of existence quite easily.
As postmodern theorist of history,

Michel Foucault, has often noted: It’s all
about Power, baby, and he who controls it
is the top cock on top of the dung heap

crowing while eating the maggots beneath
him, betraying Jesus each time he speaks
or tweets his anti-truths before three a.m.

when much of his animal kingdom sleeps.
He does not know this, but the grand narratives
of legitimation are no longer credible. He is

surrounded by dramas of beset manhood –
men becoming feminized by giving in to cultural
stereotypes of what it means to be a man:

ranking women by numerical systems of ten
in locker rooms as if life were a Miss Universe
contest and he, only he, is the judge with the Power

bragging to pals about grabbing women
by their “pussies” and making them do his will.
They bend to his Power: I will control your genitals

your hysterical vaginas. His wives must take it
with a smile because they themselves are “Tens”
and he is the President of The America First and they

of course, are expendable. Just watch Melania’s smile
disappear when the Monarch is not looking her way
just watch his children bow and kowtow when they

know his majesty is looking. But I digress. Truth
is in the eye of the beholder, not in the world of data
and fact. The media should just “shut up” said

President Bannon, especially about his attempts
to begin an alt-right coup in the Vatican against Pope Francis
that faggot loving, Muslim loving disgrace of a pontiff

who gives succor to the poor and homeless, the “losers”
as King Donald would have it, those who have no
place in his domain. Some of whom might even have

the lovers of Nascar races, the one True American Firster
sport beloved by the new postmodern poor white voters.
But wait. There cannot be a “True” America Firster sport

because all Truth is relative. All sports can be True and
all the poor white folk of America can also be True in
their own anti-matter, alternate-truth way which is now

The American Way. Oh, say can you see, you billionaires
in the cabinet of the West Wing, you elite oligarchs
who will now rule the dung-heap-kingdom, can you see that

it was the Muslim scholars who saved Plato and Aristotle
from the trash can of history? Who invented algebra (an
Arabic word) and preserved knowledge when Europe was

stumbling about in the early middle ages? Can you open
your eyes and hearts to the Truth of this statement and
not condemn all of Islam for the acts of a few, not ban

those seeking asylum in what was once the best of
all possible worlds until the rich and powerful and
hypocritical became the “deciders” and rulers of us all?

Featured Art:  The School of Postmodernism by Vittorio Pelosi (Own work) [Public domain], via Wikimedia Commons, 2009

In The School of Postmodernism, Vittorio Pelosi, replaces the philosophers in Raphael’s School of Athens with Postmodern icons where each figure attempts an objective depiction of the life model, but their work is subjected to their postmodernist ideologies. It is one of the best known paintings to come out of the Intentist movement, which was founded by Vittorio Pelosi.    Intentists include artists, writers and philosophers.