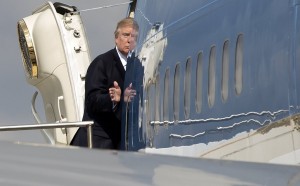 Fly high all over Washington D.C.
In the Capital, in the Oval
Office, even in Lincoln’s bedroom.

To get some. Get some piece of the pork-
Barrel-pie before they fly away home.
When swine fly in Air Force One

You and your family had better run
For those proverbial hills, or underground,
Before it’s too late to run.

Don’t forget to take your gun – you have
One, don’t you? To shoot all those zombie drones
Who lurk in the wake of winged flying piggies

Like Canada Geese into airplane engines.
They are gonna get some, those swine, and
Their zombie minions who follow them

Like carrion crows followed the Roman legions.
Swine and zombies love the taste of human flesh
And now with wings can dive-bomb on anyone

Who gets in their way to eat clean down
To the bone like murder victims in the Old West
Thrown into the pig pen to get rid of the evidence.

Tombstone and Deadwood days are back again:
The twin fasces on Capitol Hill with their axes
And rods take on a new hue—begin to glow now

And soon will sprout their own wings to fly
With their new leaders, flying beside the patrician
Swine, protecting them from all future assault.

SPQR – The Senate and People of Rome on man-
Hole covers all over Rome put there by Mussolini:
Another swine who flew too high like der Führer

Flying above the Bavarian Alps: Deutschland First
His battle cry until, finally, in nineteen forty-five
Hiding beneath Berlin in his underground bunker

Blind like a mole without wings, all the fascist
Flying swine brought back down to earth to hang
Upside-down like Mussolini in the Eternal City of death.

Featured Photograph: President Donald Trump boarding Air Force One in West Palm Beach
……by Stephen Crowley @Stcrow, 6 February 2017
“Washington is all artifice and show business — even more so today than when I started,” Mr. Crowley said. “There is a lot to be upset about these days, and there are a lot of people to hold accountable in media and politics.”   The Idiosyncratic Eye of Stephen Crowley

Related Article: How Republics End
……by Paul Krugman
“It takes willful blindness not to see the parallels between the rise of fascism and our current political nightmare.  . . . One thing all of this makes clear is that the sickness of American politics didn’t begin with Donald Trump, any more than the sickness of the Roman Republic began with Caesar. The erosion of democratic foundations has been underway for decades, and there’s no guarantee that we will ever be able to recover. But if there is any hope of redemption, it will have to begin with a clear recognition of how bad things are. American democracy is very much on the edge.”