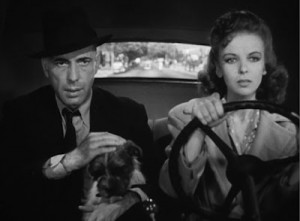 The caper always goes wrong.
Some dope makes a stupid move
Like shooting the cashier or a copper
Or someone gets the shakes
And talks too much or
Someone doesn’t move at all and staring
Into the abyss he inadvertently
Screws the pooch
Or someone moves too soon and there’s no
Getaway car parked by the curb
Or maybe the dumb mutt follows
The car and the pooch screws you.
The caper always goes wrong
And someone’s got to pay the piper
Because that someone’s already
Called the tune and the tune
Has lost its melody.  Doomed
And rotten you go through the motions
Knowing too well the motions all
Lead down into an empty well
And no wish is going to get you through.

Related Article: The Film Noir File: Bogie is at the top in ‘High Sierra’
by Film Noir Blonde and Mike Wilmington, filmnoirblonde.com
“In 1941, the same year he played Sam Spade, private eye, one of the greatest of all movie detectives, in John Huston’s classic film noir “The Maltese Falcon,” Humphrey Bogart also played one of the greatest of all movie gangsters, Roy Earle, in Raoul Walsh‘s classic noir, “High Sierra.” If Spade was one of the meanest, most realistic and most unsympathetic of all movie detectives (up until then), Earle was one of the roughest, least clichéd but most surprisingly sympathetic gangsters. He’s a hard guy with a soft streak, whose sentimentality (especially toward women and little dogs), may trip him up in the end.”