To Age Slowly Without Pain 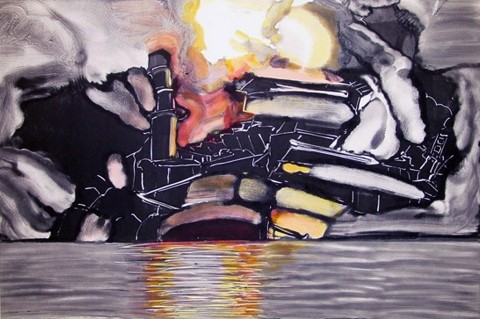 The insubstantial beauty of smoke
lilting upwards from an unseen stack
on a clear winter morning,

lifts the heart as briefly as it rises,
and then fades away with the wind;
attacks the senses with acute demand

as sharp as battle lances brandished
centuries ago in long forgotten China,
where the Confucian texts of war

first were caricatured on slim sticks
of bamboo strung together with silk cords
that crumbled in time, leaving only

forgotten the moment light pales through the window,
never to be recalled until the moment when death
calls, and all forgotten dreams are remembered.

The insubstantial beauty of morning’s river,
placid and green, clear and clean, as though
one could walk across its mirrored surface

to the other shore, where the night before
gold and red lights slashed the tide like knives
glittering out to the center, where dreamy boats

flow upstream pushed by the steamy breath
of river spirits, and river gods, who watch us
from the fourth dimension and shed frozen tears

over our ignorant sins, and our transient beauty.
They watch as children wake from fitful sleep
to see air-to-ground missiles explode all around them,

the sight of death who comes roaring down from above
from million dollar flying machines flown by deadly angels,
who are agents of the Dark Star disguised in Christ’s apparel.

The insubstantial beauty of life as it morphs into death,
that precise moment when the moth leaves the mouth
and flies to we know not where, to some other dimension

where other frightened children sing one eternal note of dismay,
where bands of white light hum in unison mantras of reckless joy,
forever flying above golden rivers, glowing from endless sunrise.

from Eavesdropping in Plato’s Café